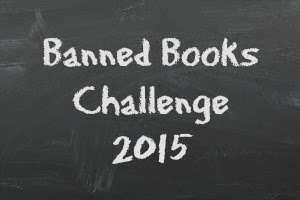 I need a sign-up post for my own challenge, now don't I? Since I am trying to read mostly from my shelves in 2015, I am listing the options for this challenge that I already own. There are (of course!) some others I would like to read that I could borrow from the library, but I think I have more than enough to choose from here.

If you're looking for more information, all of these titles can be found on my Goodreads Banned or Challenged Books shelf (as well as others I have already read and a few extra titles I don't have in my collection). The number of choices is a bit ridiculous, is it not? I should have no problem tackling the 6-9 books of the Rabble-Rouser Level I'm aiming for. If I really get on a roll, I may bump myself up a level, but we shall see how the year goes!

Thirteen Reasons Why, by Jay Asher
Looking for Alaska, by John Green
Two Boys Kissing, by David Levithan
Miss Peregrine's Home for Peculiar Children, by Ransom Riggs
The Miseducation of Cameron Post, by Emily Danforth
Before I Fall, by Lauren Oliver

Contemporary/Modern Classics
The Pillars of the Earth, by Ken Follett
The House of the Spirits, by Isabel Allende

The House on Mango Street, by Sandra Cisneros
The Handmaid's Tale, by Margaret Atwood
A Prayer for Owen Meany, by John Irving

Classics
Dangerous Liaisons, by Pierre Choderlos de Laclos
The Adventures of Huckleberry Finn, by Mark Twain
The Adventures of Tom Sawyer, by Mark Twain
The Canterbury Tales, by Chaucer
Their Eyes Were Watching God, by Zora Neale Hurston
Lady Chatterley's Lover, by DH Lawrence
Women in Love, by DH Lawrence
One Hundred Years of Solitude, by Gabriel Garcia Marquez
Lord of the Flies, by William Golding
Alice's Adventures in Wonderland, by Lewis Carroll
The Great Gatsby, by F. Scott Fitzgerald

To Kill a Mockingbird, by Harper Lee (re-read)
Catcher in the Rye, by JD Salinger (re-read)
Fahrenheit 451, by Ray Bradbury (re-read)