On GoodReads, this book is described as, "Part mystery, part ghost story, part riveting historical fiction, The Dark ushers the reader into the shadowy border between longing and belief as it unfolds the incredible story of the famous and controversial Fox Sisters, Maggie, Katie, and Leah." I don't know about you, but I'm sold! 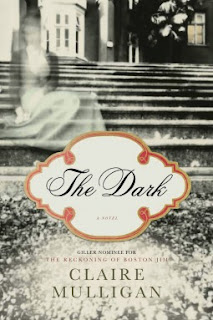 For some reason, this book strikes me as the kind of story Kate Morton fans would enjoy and I definitely count myself in that group. I'll have to wait a little longer to find out if my first impression is correct!

For more information, check it out on GoodReads.
Waiting on Wednesday is hosted by Breaking the Spine.
Posted by Christine at 12:01 AM 11 comments:

Email ThisBlogThis!Share to TwitterShare to FacebookShare to Pinterest
Labels: Waiting On Wednesday

No, the blog is not migrating anywhere -- myself, my husband, and all our accumulated crap (translation = my books) are finally moving back into our very own digs! I don't plan to completely disappear from the blogging world, but if I don't post quite as often, please know it's only because I'm crazy busy getting settled into our first house. I don't know how much time I will have for blog-related stuff, but I want you to know I'm not gone for good. I'm going to be very sad if I don't have time to read any new books, but hopefully that won't be the case. And not to worry, as soon as I get bookshelves up, there will be photos!
Posted by Christine at 7:00 AM 10 comments:

This book is cheating a little bit because I'm assuming I will enjoy the book that precedes it, Angelology. In this case, I would rather wait to read the first until at least the second is also available. What can I say, I'm impatient! I'm also more likely to stick with a series if I read two installments back to back. If I am only one book in, there is a greater potential for my interest to wane. The manager of the used bookstore I bought the first one from had only good things to say about it, so here's hoping it lives up to the buzz! 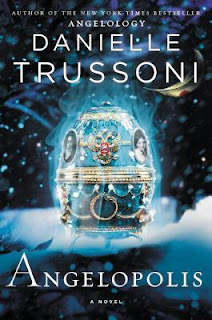 For more information, check it out on GoodReads.
Waiting on Wednesday is hosted by Breaking the Spine.
Posted by Christine at 3:24 PM 6 comments:

Email ThisBlogThis!Share to TwitterShare to FacebookShare to Pinterest
Labels: Waiting On Wednesday

It's going to be really hard to keep this list to just 10, so I don't think I'm even going to try! I have so many series I want to read, but I haven't gotten around to starting them yet for various reasons. Lack of time is a major one, but there are also quite a few I am purposely waiting to start until all the books are published. A good series allows me to spend more time with characters, storylines, and worlds I love, but sometimes it irks me when it seems every new book coming out is part of a series. Sometimes I want to linger, but other times I just want to know what happens! It takes a special kind of loyalty to follow a series from the beginning, especially if you read the first book shortly after publication -- you could be waiting years (or decades!) to see the story all the way through.

So while I'm super-stoked I just got the shipping notification for my pre-order of Lauren Oliver's Requiem, I'm also trying to purposely seek out stand-alone novels more often, so I don't always feel like I'm left hanging. I'm not trying to abandon series altogether though, so I do intend to read the following series at some point in the not too distant future. Though considering this list of ten easily morphed into twenty, it may take me awhile!

I'm using the first book to represent each series (in no particular order) -- click on any of the covers to go check them out on GoodReads.

Children's/Middle Grade
18. His Dark Materials, by Phillip Pullman
19. A Wrinkle in Time, by Madeleine L'Engle
20. Leisl & Po, by Lauren Oliver

Top Ten Tuesday is hosted by The Broke and the Bookish
Posted by Christine at 1:30 AM 34 comments:

It's that time of week when I share some fun things from around the net -- I hope you find these links as interesting as I have!
* * * * *

1. Pay to Browse? -- Shelver wrote about this ludicrous idea floating around in which some bookstores are talking about charging customers to browse their shelves. I get that the digital age makes it increasingly difficult for brick & mortar stores, but I am convinced this would cause more problems than it would solve.

2. Real Men Read YA -- I am borrowing this one from Kay of It's a Book Life's list last week because I am so in love with this blog and so happy she pointed me toward it. I read the very first post and then just kept reading more. Luckily it's a pretty new blog, so it didn't take me that long! My husband and I both read YA (and non-YA), so I really love this guy's perspective and his candor. His blog is funny and unique and definitely one of my new favorites.

3. Speaking of YA, On Reading YA: Target Audience, Purpose, Darkness, and Prejudices over on Christina Reads YA is a fabulous argument for why children's and YA lit has value for people of all ages. So if you have ever been irritated by people who turn their nose up at it or claim the only books worth reading are adult books, do yourself a favor and read it too. Christina put into words very eloquently what I wish I could have said the first time I encountered YA-hate. YA is not for everyone and that's fine, but don't make me feel bad about enjoying Harry Potter or The Hunger Games!

4. And lastly, I spotted The Ultimate Comedy Library: 57 Books Every Comedy Fan Should Read over on SplitSider. I clearly do not need any more books on my TBR list, but I'm a big fan of humor on audio, so I bookmarked this list for the next time I need an audiobook for a car trip or decide to give multitasking a try and listen while doing chores, working out, etc.

Have a good week everyone :)
Posted by Christine at 7:00 AM 8 comments:

Take Control of Your TBR Pile

I'm going to be crazy busy this month since I am (hopefully!) moving sometime this week, but I've had my eye on this challenge for a while and figured I might as well join anyway. If I can read four books (one per week) for this challenge, I'll be quite pleased. My plan is simply to read books I'm really excited about so I'll want to sneak in a few chapters any chance I get!

The rules for this challenge are quite broad since the only real requirement is the books you choose must be published before March 2013. Some of my picks are technically review books and library books, but I already have them in my possession, they fit the date requirement, and they are on my TBR list, so I think I'm in the clear! As an added bonus, they crossover with my various other 2013 challenges, so I'll be making progress all around.

The following are the three books I'm definitely planning to read and I'll leave any additional choices for later so I can see what I'm in the mood for. I just started City of Dark Magic and I'm already so in love with it --I can't wait to tell you more about it!

If you want to join the fun, click on the badge above for more information and to sign-up!
Posted by Christine at 12:26 AM 10 comments:

On Having a Dissenting Opinion (no spoilers!)

I recently finished reading Lauren DeStefano's final installment of the Chemical Garden trilogy Sever and I've been dragging my feet about writing a review for it. Part of the problem is that it's really hard to write about the third book in a series without any spoilers (and spoilers are so not my thing). But there's something else that's been bugging me, so I'm going with a discussion post instead.

First, let me say that I enjoyed Sever immensely. I give it 5 stars and a high-five to Lauren DeStefano for writing such a great ending to a beloved series. All the loose ends were tied up and everything that happened made sense to me. As I turned the last page, the series felt resolved and complete. There may have been some twists and turns, but nothing I couldn't wrap my brain around. I didn't love every single development in the story, but if everything was too neat or perfect, it wouldn't be believable. In books, as in life, sh*t happens. Maybe that's a little callous, but it's true.

So what's really been bothering me are all the (spoiler-free) social media references to how devastated many readers have been about a certain thing that happens in the book. There is high drama I tell you. There is a particular chapter people keep expressing complete and utter dread for. And those who have moved past THE CHAPTER seem to be expressing an alarming amount of distress. I was getting really nervous as I neared THE CHAPTER myself, but after I moved past it, I felt very out of the loop. Bad things happen. I don't like when bad things happen, but they do. I was not all distraught about this particular turn of events and was starting to think there was something wrong with me.

So here's what I want to know -- have you ever been on the opposite side of popular opinion like this? I'm sure it has happened to me before, but it was never this drastic. It was also pre-blog and pre-twitter so I didn't feel like my thoughts stuck out like such a sore thumb. Any books where you just couldn't relate to the majority of other readers? Please share!
Posted by Christine at 12:25 AM 14 comments: