I have been on a major children's book kick lately. Combined with the fact that I revamped my Classics Club list to focus mostly on children's classics, I just couldn't pass up participating in this event!

There are no "children's classics" police for this challenge, but I'm going to try to stick with the suggested guidelines and read books at least 50 years old -- after all, that leaves plenty to choose from!

I would like to start off by reviewing A.A. Milne's Winnie the Pooh books which I've already read. Next up, I should read Treasure Island by Robert Louis Stevenson since I picked it for the Classics Club's latest Spin. I'm also a few stories into The Complete Tales of Peter Rabbit by Beatrix Potter which I'm reading to my son -- I may not finish them all this month, but I'd definitely like to continue. If I have any additional reading time, I can choose from the (many) children's classics on my shelves:

The Secret Garden, by Frances Hodgson Burnett
A Little Princess, by Frances Hodgson Burnett
Alice's Adventures in Wonderland, by Lewis Carroll
Through the Looking Glass, by Lewis Carroll
The Jungle Book, by Rudyard Kipling
Just So Stories, by Rudyard Kipling
Five Children and It, by E. Nesbit
The Enchanted Castle, by E. Nesbit
Aesop's Fables, by Aesop
Pinocchio, by Carlo Collodi
Peter Pan, by J.M. Barrie
Grimm’s Fairy Tales, by Jacob & Wilhelm Grimm (selected edition)
The Wonderful Wizard of Oz, by L. Frank Baum
Around the World in Eighty Days, by Jules Verne
Twenty Thousand Leagues Under The Sea, by Jules Verne
Charlotte's Web, by E.B. White
Stuart Little, by E.B. White
The Wind in the Willows, by Kenneth Grahame
Anne of Green Gables, by L.M. Montgomery
The Lion, The Witch and The Wardrobe, by C.S. Lewis
A Wrinkle in Time, by Madeline L'Engle
The Merry Adventures of Robin Hood, by Howard Pyle
The Story of King Arthur and His Knights, by Howard Pyle
Pippi Longstocking, by Astrid Lindgren
Charlie and the Chocolate Factory, by Roald Dahl
From the Mixed-Up Files of Mrs. Basil E. Frankweiler, by E.L. Konigsburg
(that last one was published in 1967 -- I'll call that close enough!) I almost didn't write this wrap-up post because I thought it would just be a rehash of my March #ShelfLove Update. But for this month-long challenge, I could read any book published prior to March 1, 2016 (library books included!), so I actually read quite a few more:

Children's/Middle Grade
Wonderstruck, by Brian Selznick
The One and Only Ivan, by Katherine Applegate
The House at Pooh Corner, by A.A. Milne

Young Adult
All the Bright Places, by Jennifer Niven

Thanks to Kimberly over at Caffeinated Book Reviewer for hosting again! As my blogging has gotten more relaxed, I'm finding I really enjoy month-long challenges. I like having a focus for my reading for the month without the time pressure of shorter challenges. There are a few I have my eye on for upcoming months like the April Children's Classic Literature Event and Kimberly's May Clean Sweep ARC Challenge -- anyone want to join me? My sign-up for the Classic Lit event will be up soon!

Email ThisBlogThis!Share to TwitterShare to FacebookShare to Pinterest
Labels: March 2016 Take Control of Your TBR Pile 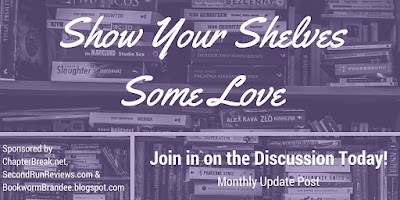 March's discussion topic is Book Tropes That Get on My Nerves. When I first saw this question, I didn't think I would have an answer, but a recent read has reminded me there is indeed a trope that annoys me every. single. time. It is what I will call "The Misunderstanding" -- wherein the entire plot of a book seems to hinge on a miscommunication, a deception, a secret, etc. The sort of book where the reader watching from the sidelines knows exactly what is going on, but if the characters had a 5 minute conversation with one another, there would BE NO BOOK because everything depends on this rift in communication. I am well aware these sorts of things are realistic and happen in real life, but boy does it make a book a slog for me to get through.

Anyway, onto my #ShelfLove update! In March, I read the following books that were on my shelves prior to 2016:

I also started The Winner's Crime and a re-read of Diana Gabaldon's Drums of Autumn. But those didn't make this month's tally -- maybe next month!