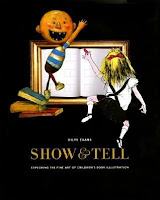 Show and Tell: Exploring the Fine Art of Children's Book Illustration by Dilys Evans
Publisher: Chronicle Books
Date: March 2008
Format: hardcover
How did I get this book? borrowed from library
Rating: 4 of 5 stars
GoodReads

This was a very informative exploration of picture book art focusing on 12 different illustrators. As the author states, this is not meant to be a "best of" list, but rather she chose a group of artists she felt offered "a wide range of styles, technique, and content" and I feel she certainly delivered on that. All of the featured artists may not be my particular favorites, but I definitely learned a lot by reading more about their work, background, inspirations, and process.

Only three of the featured artists were completely new to me (Trina Schart Hyman, Petra Mathers, and Harry Bliss), but this book piqued my interest in their work -- particularly the prolific Trina Schart Hyman whose chapter I found particularly intriguing. The other nine illustrators (Brian Selznick, Bryan Collier, Paul O. Zelinsky, Hilary Knight, David Wiesner, David Shannon, Betsy Lewin, Denise Fleming, and Lane Smith) I had previously read at least one of their books, but oftentimes it was their most popular work or their Caldecott award-winning work. So even for those artists I previously was somewhat familiar with, I've now been introduced to a broader range of their work. While I probably won't seek out every single one mentioned, I have certainly added to my picture book TBR list! I've already borrowed quite a few from the library and (shocker!) ordered used copies of two out of print titles my library system didn't have.

This sort of deep-dive into picture books and illustration won't be for everyone, but as someone who reads a ton of picture books these days -- both with my son and now on my own -- it is an area I want to learn more about. Out of habit, I still tend to focus on the text more than the art when I read a picture book. So the more I learn about illustration, the more I feel I can appreciate and understand it in its own right.
Posted by Christine at 1:09 PM