Reading Paddington as an Adult

As a kid, I had a Paddington Bear stuffed animal -- in fact, I do believe it's still at my parents' house! We have pictures of me carrying him around (at the park, no less!), but I don't have any memory of reading the Paddington books as a child. If we did read any of them, they likely were the picture book adaptations and not the full-length novels. The picture books are lovely -- and I have a treasury of them on my son's shelves -- but I really wanted to read Paddington's full story and experience it for myself.

Once I saw that the audiobook of A Bear Called Paddington was narrated by Stephen Fry, I decided to go with that format. He is such a fantastic narrator (and boy do I wish I could listen to the UK audiobooks of Harry Potter he narrates!) and delivers this classic story flawlessly. The only thing missing is the illustrations of the print edition, so I ended up getting a lovely hardcover anniversary edition for our shelves as well. I'd love to get the full series in print someday, but have held off so far since I already have the next few books queued up in my Audible library.


The second novel, More About Paddington, is the only other one narrated by Stephen Fry and that is as far as I've gotten in the series thus far. In fact, I've now read them twice and they were just as good the second time through. While the first novel is surely the most well known and widely read, the follow-up was an equally wonderful reading experience for me. Although the books are divided into chapters to be read in sequence, most feel like they can be read as their own stories as well. Particularly once you are past the initial few chapters that introduce Paddington and the Brown family, they start to read more and more like individual adventures within the established framework. I feel much the same about the Winnie-the-Pooh books, as a matter of fact. 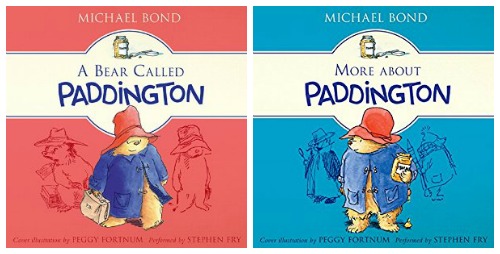 Paddington is an endearing character and I can certainly see why his popularity has endured through the decades. He has a knack for getting himself into trouble and it's always interesting to see how he gets himself out of that trouble -- one way or another. Like many well-loved children's book characters, he means well, but mishaps, misadventures, and misunderstandings happen -- and make for great storytelling along the way. The novels are definitely still far above my son's level, but I do look forward to sharing them with him someday. In the meantime, I will continue reading/listening to the rest of the series myself and I'll have to remember to pull down our picture book versions at storytime!

Posted by Christine at 2:59 PM