Review: Give Your Child the World 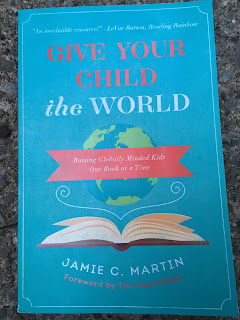 Give Your Child the World: Raising Globally Minded Kids One Book at a Time by Jamie C. Martin with a Foreword by Tsh Oxenreider
Date: June 2016
Format: Paperback
How did I get this book? Purchased
Goodreads | Publisher

Anyone looking to pick up this book should know it is predominantly a reference volume/book list. Part One which essentially introduces the author and her family, gives some information on how to encourage a global perspective through books, and why she feels such a perspective is important (largely influenced by her Christian faith) is short -- it runs from pages 11-48 and that includes a Foreward by someone else. I enjoyed the opening to this book and used plenty of book darts to mark favorite lines, but if you are expecting a lot of research, statistics, or a deep dive into the subject matter, you're probably going to be disappointed.

I like Martin's premise and agree with her about the importance of sharing books with our kids that broaden their perspectives and introduce them to people, places, and cultures they are unfamiliar with. However, I'm not entirely sure the booklist lives up to the task. Now, I have NOT read the booklists (Part Two) word-for-word, but I have browsed through it and there are some things that give me pause. I'm not claiming to have done an extensive analysis of all the recommended titles, but I have some overall impressions.

First of all, there aren't that many books that take place in current/recent times. History and historical context are certainly important for encouraging a global perspective, but given how much Martin says she wants kids to fall in love with the world and and all the people we share it with, I really was expecting more contemporary stories. For the Europe chapter, there are a whole lot of books taking place during the World Wars and (as other reviewers have said) I don't think that paints a very complete picture of the region. The same could be said for the selections for the Middle East which largely recommends books featuring conflicts, so much so that Martin does not even recommend any titles for ages 4-6 because of that very fact.

I was also expecting more books actually from other countries, books in translation, and books written by people who are a part of these cultures from around the world. I do believe there are books recommended that fit these attributes, but I don't think they are as predominant as I was expecting -- and it's pretty difficult to distinguish which titles are which. There doesn't seem to be any notations about the authors' background or expertise in the various countries or cultures which seems important to me given what this booklist is trying to achieve.

Lastly, there are some titles that raised red-flags for me -- particularly books about Thanksgiving that seem highly problematic and a large number of titles referring to Native Americans without any mention of specific tribes or nations, as if they are just one big group. I am not as educated in this area as I should be, but some preliminary research on the highly respected site American Indians in Children's Literature seems to show that Give Your Child the World is recommending a mix of titles -- some with good representation and some with poor/inaccurate representation. As I said earlier, I am not as educated as I should be on this subject, but I think it is important, especially when recommending books specifically with the goal of broadening young minds and teaching them about people from all around the world. So I'm keeping this book on my shelf, but taking the recommendations with a grain of salt, trying to remember that I should ALWAYS be reading critically, and realizing that I have a lot still to learn myself!

Edited 8/14/18 to add: Recommending Tikki Tikki Tembo as a book representing China is really a disgrace. I think I have found a much better resource for global kidlit, so stay tuned!
Posted by Christine at 8:43 PM