The Further Adventures of Ebenezer Scrooge, by Charlie Lovett
Series? This is a sequel to Charles Dickens' A Christmas Carol. This review will contain spoilers of A Christmas Carol.
Publisher: Viking
Date: Oct. 20, 2015
Other Details: Hardcover; 128 pages
How did I get this book? free from the publisher for review
Rating: 4 of 5 stars
GoodReads | Author | Publisher

As I mentioned recently, A Christmas Carol is a favorite book I read for high school. Though it was a classic (and homework!) I truly enjoyed it at the age of 16 and it has remained a favorite of the season for me. I've seen movie and cartoon adaptations, I've re-read it on audiobook, and this year I was determined to re-read it in print. I read this illustrated edition, but how beautiful is the Penguin Christmas Classics edition? (It is pictured below for the giveaway and I even featured it in a post last year!)

As you probably already know, A Christmas Carol is the tale of miserly Ebenezer Scrooge who hates Christmas and doesn't have a charitable or kind-hearted bone in his body. He is concerned with his business and his profits and resents having to give his employee Bob Cratchit even one day off to celebrate the holiday. He scoffs at the idea of giving anything to help the poor and destitute and has no desire to visit his own family on Christmas, though his nephew keeps inviting him in a gesture of goodwill and Christmas cheer. Of course, this would be a pretty sad Christmas tale if he didn't have a change of heart by the end!

So, where A Christmas Carol ends, The Further Adventures of Ebenezer Scrooge picks up. After Scrooge has been visited by the three spirits and seen what his future holds if he does not change his ways, he promises, "I will honour Christmas in my heart, and try to keep it all the year." And keep it he does! Scrooge gives away all his earnings, makes time for family, and is kind to everyone he meets. All year long, he wishes friends and strangers a Merry Christmas and a Happy New Year! But he wishes to do more good -- he wants to help the ghost of his friend and former partner Marley to free himself from his weighty chains. So they use the three spirits to inspire some more changes of heart in those around them.

This was a truly lovely book to read during the Christmas season. It has the style and feel of Dickens and is true to the spirit of the original. Some of the lines and phrasing are taken directly from A Christmas Carol and it was so interesting to see how those same words could be woven into a very different story. As Lovett details in his Afterword, some places and descriptions were also borrowed from other stories by Dickens. I imagine that someone who is more widely read in Dickens' work would appreciate those references more than I could!

My one disappointment was to see some of the same people who were held as good examples for Scrooge in A Christmas Carol were the ones being miserly in this sequel! It actually worked very well for the new story, but it was a little jarring to read at first. So I recommend going into this one with an open mind and an open heart. It wasn't exactly what I was expecting, but it was a wonderful tale I know I will read again in years to come.

Now for the giveaway!

Viking and Penguin Books are offering one reader a finished copy of both The Further Tales of Ebenezer Scrooge and the Christmas Classics edition of A Christmas Carol! Enter in the Rafflecopter  widget below from now until Monday, December 21, 2015 at 12 AM EST time. US mailing addresses only. Good luck! 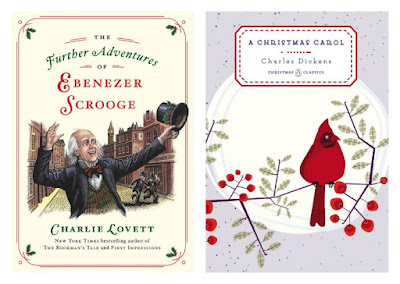 Posted by Christine at 1:57 PM