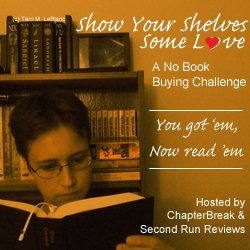 My main source for free books I can add to my collection is giveaways -- I regularly enter Goodreads First Reads giveaways and other contests on blogs I follow and have won quite a few over the years. When I was blogging and reviewing more regularly, I also entered contests and filled out request forms through the ShelfAwareness Pro newsletter. I've since unsubscribed as I don't feel I qualify as a reviewer anymore (and I also don't want the pressure of release dates hanging over my head -- I have enough to read as it is!) I still love their Reader newsletter though and think it's a great resource for finding out about new books. I occasionally download a freebie ebook from Amazon, but it's not my preferred reading format, so most of them are just sitting there unread.

And while I (obviously) don't get to keep them, I do love all the free books from the library. Sometimes I get in the mood to try a new genre or author and (especially now with this challenge!) I don't want to spend a lot of money cluttering up my shelves even more, so my library card has really come in handy. I especially love borrowing digital audiobooks because it's so convenient to do from home and I have absolutely zero desire to own audiobooks the same way I own print books. A lot of people think Overdrive is a pain, but I've had no issues. My wishlist on my account is overflowing and there is always something available for immediate borrowing. And the waiting lists aren't usually too long for anything else I've had my eye on. Well, except for super high profile books like The Girl on the Train where I am currently #82 in line, but they have a bunch of copies, so it always goes faster than I expect. They even have an easy system where you can recommend your library purchase a title and if they do, you get notified by email and have the opportunity to borrow it first. So awesome.

On to my March update! I'm still holding strong overall, but must admit that my exceptions are probably the only reason I've been able to stick to my goals. I still have a bunch coming in, but it's mostly books for the baby and I'm quite happy with my ratio of new acquisitions vs. books read from my shelves.

January-March:
* Thanks to my rules/exceptions, I still haven't used any of my new book allotment for the year -- I have a few spring titles in mind that I'm saving up for though :)

January/February:
* The Rosie Effect, by Graham Simsion (hardcover)
* Angels in the Dark, by Lauren Kate (ebook)

January/February:
* Won an ARC of The Silver Witch, by Paula Brackston from Goodreads
* Won Seraphina, by Rachel Hartman from Book Riot

January/February:
* Psy-Q: Test Yourself with More Than 80 Quizzes, Puzzles and Experiments for Everyday Life, by Ben Ambridge

January/February:
* Those Who Wish Me Dead, by Michael Kortya

March:
* The Sunday Philosophy Club, by Alexander McCall Smith -- I received the 3rd in this series as a Christmas gift, so I've been trying to track down the earlier books
* The White Woman on a Green Bicycle, by Monique Roffey -- this Orange Prize shortlist nominee caught my eye

Book Club Books -- 0
January-March:
* Still borrowing from the library, except for the April book which I already own.

Posted by Christine at 8:16 PM

Email ThisBlogThis!Share to TwitterShare to FacebookShare to Pinterest
Labels: Show Your Shelves Some Love Challenge