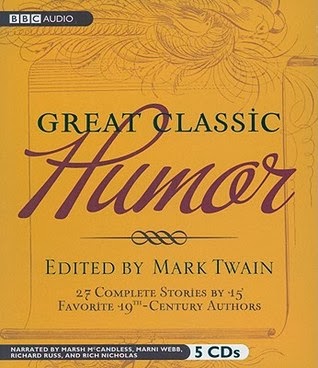 Great Classic Humor, edited by Mark Twain
Publisher: BBC Audio/AudioGo
Date: stories from the 19th century; audiobook published 2009
How did I get this book? borrowed from the library
Rating: 3.5 of 5 stars
GoodReads | Publisher

I stumbled across this audiobook at my local library and thought it sounded perfect for the Classics Club (even though it wasn't on my list!). I typically love humor books and was curious to read some selections from the 19th century. Poking around on GoodReads after I brought it home, I was a bit surprised to see so many negative reviews (last time I looked, it had an average rating of 1.71!) -- it seems the consensus is that 19th century humor isn't all that funny. Having now read it myself, I have to both agree and disagree.

I think part of the problem is people tend to find things they can relate to humorous and a lot of the topics these stories cover are not necessarily relate-able to modern audiences. Some certainly are, but definitely not all. And to be perfectly honest, I think humor meant something slightly different back then. Many of these stories showcase irony, cleverness, or mischief -- all within the realm of humor, but not exactly stand-up comedy material.

I will admit that very few of these stories got a true laugh out of me, but Mark Twain's A Restless Night had me in stitches! Anyone who has ever shared a bedroom with another person who falls asleep promptly, while they lie awake with a preoccupied mind, worrying that every toss and turn might wake their companion (this describes me so well!) will most definitely find this particular story extremely funny. For better or worse, this is a perfect example of how the relate-ability of a story can boost a person's opinion of it.

Another of Twain's stories I found particularly amusing was Experience of the McWilliamses with Membranous Croup. This one is a tale of a couple with a sick child, fretting over every little thing they do or do not do and how it will affect the poor dear -- it might not sound funny, but it truly was. The dynamics between the couple as they did and un-did each other's actions in an attempt to control the un-controllable was extremely well done. Whether or not you have children, their indecisiveness is probably something a lot of people can relate to, at least to some extent.

There are five other stories in this collection by Twain, but the rest are by other authors such as Harriet Beecher Stowe and Oliver Wendell Holmes, among others. I must confess, Twain's were my favorites, but a honorable mention definitely goes to Holmes' A Visit to the Asylum for Aged and Decayed Punsters, an amusing tale including quite a bit of word-play. There were multiple narrators used throughout the collection and their performances were very good. Despite the brevity of these stories though, I did find my mind wandering at times. I cannot honestly say they all captured my attention, but they were still an interesting look back in time.

Reading Challenges:
Classics Club
Audiobook
Back to the Classics: a 19th century classic

Posted by Christine at 3:12 PM